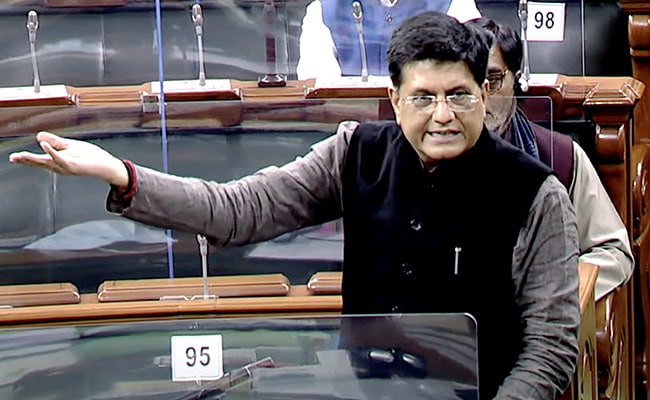 In Lok Sabha, Piyush Goyal mentioned he’ll give the reply in Hindi.

A query requested in Tamil triggered heated exchanges in Lok Sabha on Wednesday between the Opposition and Treasury benches that spilled over to the difficulty of ministers giving replies in Hindi.

It all began throughout Question Hour, with DMK member A Ganeshamurthi asking a supplementary query about FDI influx in Tamil and Union minister Piyush Goyal saying that he missed the primary half in Tamil and needed to know which undertaking he was referring to.

“If I ask a question in English, then the ministers should respond in English only… a member asks a question in Tamil and the minister replies in Hindi,” the member remarked and Mr Goyal responded by saying that he can reply in Hindi whereas the interpretation is accessible for the member.

Some opposition members shouted as additionally they apparently sought to lift the difficulty of ministers replying in Hindi to questions requested in English. In current occasions, there have been situations within the House when opposition members, particularly from southern states, have protested towards such a pattern.

Speaker Om Birla requested Mr Ganeshamurthi to repeat the query and the member requested the identical in Tamil.

A visibly peeved Mr Goyal requested the Chair for a ruling on whether or not there may be any rule {that a} query requested in a language must be replied to in the identical language.

“I will give the reply in Hindi… I also listened to the translation (of the question that was asked in Tamil),” the minister mentioned.

As Mr Ganeshamurthi once more raised the difficulty, Mr Birla smiled and requested the member to placed on the headphones. Mr Birla, who usually speaks Hindi within the House, spoke in English, saying “please member address to the Chair… no problem”.

When it was the member’s flip to ask the second supplementary query, he mentioned he’ll ask in Tamil solely and raised the query.

And Mr Goyal gave the reply in Hindi.

While responding to supplementary questions requested by members from Tamil Nadu in English, the civil aviation minister had replied in Hindi.

Soon after, Mr Tharoor had commented that it was an “apmaan” (insult) that the minister was responding in Hindi.

Mr Scindia had then responded that it was unusual for the member to make such a remark.

Immediately after Mr Tharoor made the remarks, Speaker Om Birla had mentioned, “Ye apmaan nahi hain (this is not an insult).” PTI NAB RAM SRY