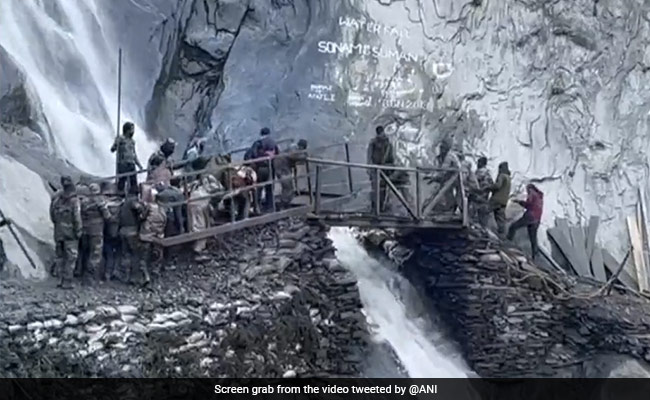 Without the bridges, Amarnath pilgrims would have needed to take a four-hour detour.

The Army reconstructed two bridges broken by landslides in file time close to Jammu and Kashmir’s Brarimarg on Baltal Axis.

The Chinar Corps restored the bridges in a single day to make sure the resumption of pilgrimage for the annual Amarnath Yatra. Without the bridges, Amarnath pilgrims would have needed to take a four-hour detour.

The bridges have been broken by landslides following swelling of Nalas close to Kalimata on the Baltal route after a sudden improve in temperature.

“On 01 Jul, 02 bridges near Brarimarg on #Baltal Axis were damaged by landslides. #ChinarCorps mobilized assets & reconstructed the bridges overnight for resumption of route & avoiding an over 4 hour detour by #Yatris,” Chinar Corps tweeted.

On 01 Jul, 02 bridges close to Brarimarg on #Baltal Axis have been broken by landslides. #ChinarCorps mobilised property & reconstructed the bridges in a single day for resumption of route & avoiding an over 4 hour detour by #yatris,@adgpihttps://t.co/AwdxMAyKSspic.twitter.com/DUQnjWAHTG

The Chinar Corps, often known as XV or 15 Corps, are garrisoned in Srinagar and are answerable for army operations within the Kashmir valley.

“The Baltal route is the responsibility of the Counter Insurgency Force – KILO. On the night of June 30/July 1 due to a sudden increase in temperature which resulted in swelling of Nalas near Kalimata on the Baltal route, the bridges at kalamata were washed away,” the Army stated in a press launch, as quoted by information company ANI.

“In a record time frame, the 13 Engineer Regiment of Chinar Corps laid entirely a new bridge in the night against heavy odds of weather and darkness. This resulted in a smooth recommencement of yatra and instilled a sense of safety and security among pilgrims. The act once again established that the Indian Army can deliver anywhere, anytime,” learn the discharge.

The Amarnath Yatra is an annual pilgrimage to a Lord Shiva Shrine positioned within the higher reaches of the Himalayas. The pilgrimage resumed this 12 months on June 30 after a niche of two years due to the COVID-19 pandemic.